The Glendale Union High School District Governing Board recently spotlighted Sunnyslope High School’s Achievement Above All recipients. The Achievement Above All event celebrates excellent members of Sunnyslope, including a teacher, a student, a student group, a support staff, and a volunteer each year. Sunnyslope High School Principal Jonathan Parker took the stage to present all recipients to the community, governing board, and superintendent. Each recipient received a certificate or award for their achievements.

English Language Learner teacher Michael Brauer is Sunnyslope’s Teacher of the Year. Brauer began his teaching career at the middle school level and then transitioned to the high school level in 2011 at Sunnyslope. In addition to teaching at Sunnyslope, Brauer is the head coach for the swim and dive program.

ELA colleague Nikki Calandra says, “Mike meets students where they are and pushes them to excellence; he never underestimates their abilities and always maintains high expectations. Mike is funny, caring, compassionate, hard-working, authentic, and just an all-around great human.” 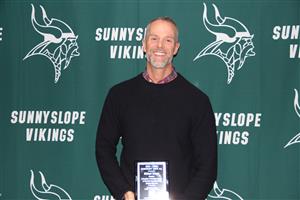 Ranked in the top 5% of her class, Madeleine Schlesinger is Sunnyslope’s Student of the Year. Schlesinger has taken seven advanced placement courses throughout her high school career. She has never earned a B in any class and has received honor roll status each semester.

In addition to academics, Schlesinger has participated in varsity badminton, soccer, and track throughout her high school career. She has earned Badminton Region Player of the Year honors and was a State Champion in doubles. In soccer, she was recognized as the MVP for three years and first team all-region for two years.

Advanced Placement Language teacher Sarah Levine says, “Many of our students excel academically. Many are talented athletes and leaders on the field. Many have made an impact in clubs and service organizations. What makes Maddie stand out for many of us, is that she does all this and does it from a place of curiosity, commitment, care for others, and a strong sense of right and wrong.” 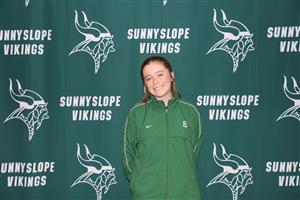 A group of over 70 student performers known for providing the soundtrack for the start of the school year is this year's Student Group of the Year. Mr. Steve Alguire leads the Vikings Marching Band. Band players begin practicing three weeks before school starts. They are usually the first students on campus each morning and often the last ones to leave. This year, their hard work resulted in a top 10 place in the state with the highest score they’ve ever earned at the state competition.

Sunnyslope Assistant Principal and band parent Demetria Andrews says, “The Viking Pride Marching band brings great joy and happiness to those who have the pleasure to hear them play. Their halftime show and the songs coming from the stands bring a level of excitement of enthusiasm to every game, assembly, and school event.” 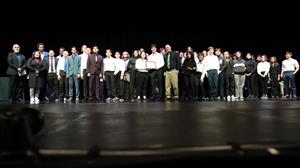 District alum, Kathie Nunn, is Sunnyslope’s Support Staff of the Year. All four of Nunn’s sons graduated from Sunnyslope between 2009 and 2016. Principal Jonathan Parker says, “What began as a devoted parent looking to invest in her son’s school has evolved into nearly two decades of dedicated service.”  Nunn received the Achievement Above All Volunteer of the Year in 2010 after her volunteering as a Viking Parent Club Board member. Nunn has been the Operations and Athletics Secretary since 2014.

Assistant Principal of Operations and Resources Tim Matteson says, “ Her love for Sunnyslope High School is truly evident and can be seen in the way she encourages student-athletes, assists parents and coaches, communicates with staff, and relates to community members.” 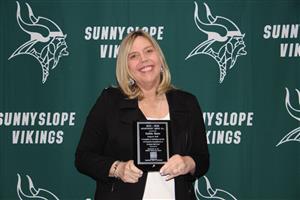 For the past six years, Carrie Lifshitz has been a dependable and versatile fixture at Sunnyslope High School. Lifshitz is this year’s Volunteer of the Year. She has volunteered as a booster for swim and dive, wrestling, and football and as a Speech and Debate judge. You can find her at any extracurricular activity her kids are participating in.

Varsity Football Coach Sam Jacobs says, “Carrie is a dream volunteer! She is one of the parents that you can put in charge of a group of other parents and know that the job is going to get done!  She makes my life easier!” 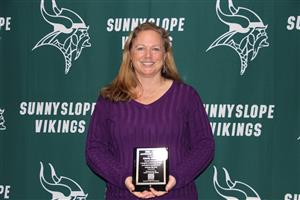